We woke up in the early hours of Saturday morning, hoisted the sails and were on our way to St Lucia by 3am. Watching the sunrise in the middle of the sea is one heck of a sight with nothing obstructing your view and the peaceful sound of the waves lapping on the side of the boat. As daylight broke, Gavin threw out some fishing lines in hope to catch us some more dinner along the way.

As we were sailing along and gazing out to sea I said to Gavin ‘where are all the whales and dolphins? We’ve barely seen any sea life out here.’ We had been living on the boat for almost 2 months now and all we had seen were a couple of flying fish. The next minute Gavin called and shouted ‘dolphins, dolphins.’ I couldn’t believe it, the universe must have heard my calls. We ran to the front of the boat and there were loads of them. They followed us for about 10 minutes playing in the boats waves and diving alongside us. It was the most incredible sight and made me one happy lady.

Further into the journey, one fishing line started spinning, then the other. We had two fish hooked! I never thought I would be the type of person to get excited by fishing, but I absolutely love it. As I ran to put my fishing belt on, Gavin tells me to wait a while to let the fish tire itself out a little. After 5 minutes (because I couldn’t wait any longer), I start to reel in the line. We had got two Mahi Mahi hooked. They jumped out of the sea and put up a good fight, but we finally got them both reeled in. I think these are the biggest fish I have caught so far and cannot wait for dinner. Gavin gets straight in with gutting and filleting the fish and stores them in the freezer for later. However much I love reeling the fish in, I still haven’t got to the point where I can take it off the line and cut it up. This trip was the first time I have actually dared to hold my catch with my bare hands and pose for a photograph!

As we approached St. Lucia we passed by the famous Pitons. The two dramatic, mountainous twin peaks soar out of the sea and are truly a majestic sight. 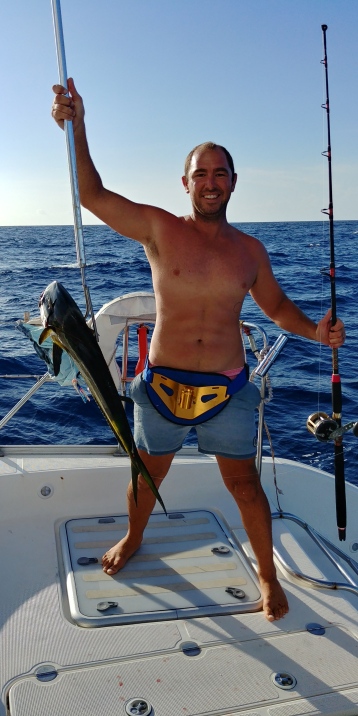 It took us around 8 hours to reach our destination of Marigot Bay located on the Western coast of the island. It was a charming little bay filled with bars, restaurants and Marigot Bay resort. We grabbed a mooring ball and headed into clear customs and immigration.  We completely forgot it was a Saturday and had to pay an extra $100 out of hours fee.

We met up with another BVI based crew from A3 and enjoyed a drink in the bar. After a catch up with all the crews we headed back to our boat for some fresh fish sandwiches. The Mahi was delicious.

Once we had filled up on lunch we headed to the marina resort to take a look around. As we took one of the mooring balls we were able to use the resorts facilities as much as we liked. The hotel and it’s two pools were absolutely stunning. I was so happy we had come to this bay and we could finally enjoy some time on land.  We were very lucky to do it in an extremely fancy place. We spent the afternoon in the pool and lounged around in the sun, catching our breaths after a long sail.

Around 5pm we dinghied around to a local bar in the bay called ‘Doolittles’ for a sundowner. We all sat on a sun lounger as we watched the sun setting with a nice chilled drink as we tried to spot to ‘green flash’ which unfortunately we did not see. The group had mixed opinions about the ‘green flash’. Some think it’s real and have seen it many times before, others think it is a myth and it is just your eyes playing tricks on you after staring (not directly) at the sun. I can honestly say I am yet to see it. After a long day we all retired to bed for an early night. 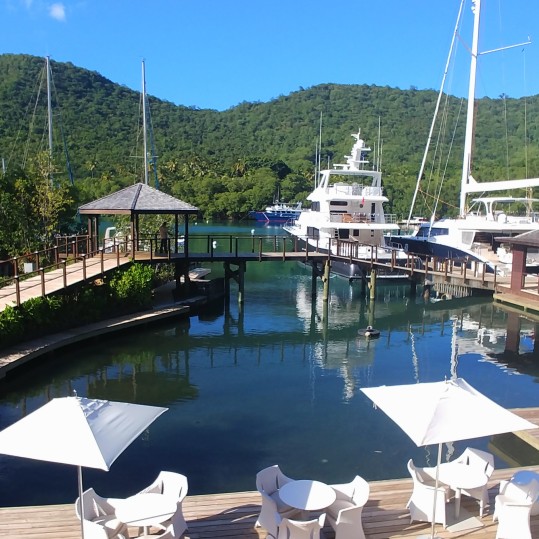 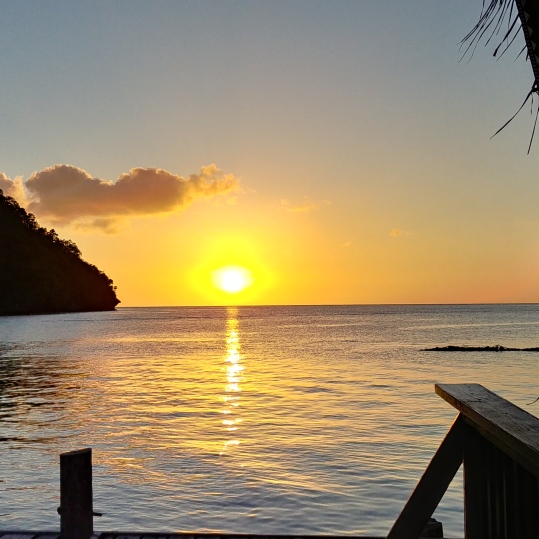 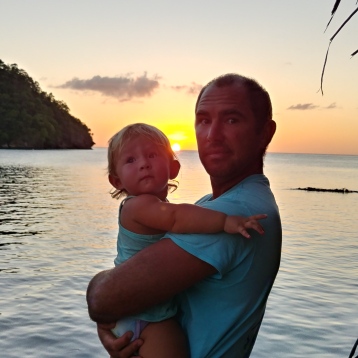 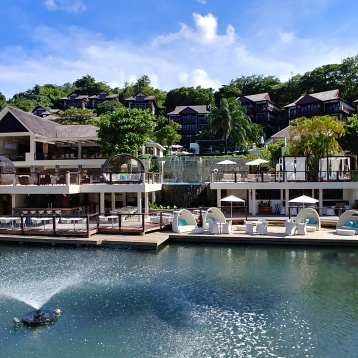 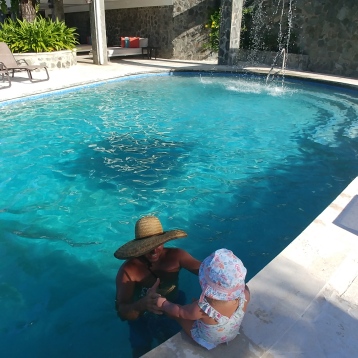 As it was hurricane season, we checked the hurricane website on a daily basis. Tropical storm ‘Kirk’ was now brewing in the Atlantic and heading this way. We were wondering whether or not to head back down south and get out of the storms way or stay hopeful that it didn’t turn into a hurricane and take our chances where we were.

After a lot of conversations and weather checks we settled on staying put. We hired a taxi and decided to go and explore the island.

The driver took us down the west coast along many winding, hilly roads. We passed through the small fishing village of Anse La Raye with its rustic wooden homed architecture and authentic display of local creole life. We stopped off at a couple of viewpoints to take in the spectacular sights of the Pitons. The Pitons are a World Heritage Site. Two mountainous volcanic plugs linked by the Piton Mitan ridge. Petit Piton 2,438. ft. high and Gros Piton 2,530. ft. high are dramatic twin peaks situated in the town of Soufriere, the oldest town in St. Lucia and the former French colonial capital. We drove through the town and up to the volcano of the same name.

The sulphur springs volcano is the world’s only drive in volcano. It is the hottest and most active geothermal area in the Lesser Antilles. As you walk by the crater you can watch the bubbling water boiling at 340 Fahrenheit creating large plumes of steam. The water contains a high amount of sulphur and iron giving off a smell of rotten eggs. Downstream from the springs the water is still hot, around 110 Fahrenheit and is a popular spot for tourists and locals alike to take a mud bath, believed by some to have medicinal properties.

From the volcano we drove to the Toraille waterfalls. We had a stop for a quick dip, however this was a very busy tourist trap and the place was heaving so we took a couple of snaps and headed back to the taxi and drove back to the marina.

The next couple of days were spent either by the pool or snorkelling the reefs just outside the bay. We took the dinghy just outside of Marigot Bay and anchored not far from land. Fish were very limited in this area, however it was the first time I’d seen so many sea fans all in one spot. Hundreds of purple fans swayed in unison as the waves crashed up against the rocks and drifted back out to sea. It was absolutely beautiful. In the evenings we mainly spent it having dinner with friends on each other’s boats.

As tropical storm ‘Kirk’ was heading closer we were deciding whether or not to move further north to Rodney Bay. After speaking with the guys in the marina office, they told us we would be safer where we were and they would give us dock space for the same price as the mooring balls. We decided this would be a good call so we re-fueled the boats and headed into a slip on the dock.

In the afternoon we all piled onto our friends boat, ‘Let It Go’ and decided to take a sail up to Rodney Bay for day out. We wanted to explore a little more of the island and needed to go to the supermarket to provision the boats. As we walked through town we were amazed to see how civilised the island was. There were loads of nice bars, restaurants, shopping malls, supermarkets and even a casino. Our first stop was at the ice cream parlour for a quick treat. We decided to split into two groups. The guys would go and do the shopping in the supermarket whilst the ladies went clothes shopping in the malls. It was the first time in almost a year that I had set foot in a clothing store and was a real treat to spend an hour or so with the girls.

We headed back on the boat and hit a white squall on the way. The cloud was so thick we could barely see where we were going.

That evening we headed to the marina restaurant who were hosting a traditional St. Lucian all you can eat BBQ. There was a live band, traditional dancing and some rum tasting. The food served were all local dishes and they only used fresh local produce. The dinner consisted of cow heel soup, avocado balls, salt fish fritters, breadfruit balls, a suckling pig, jerk chicken and fish and lambie kebabs. Dessert was a choice of tamarind balls, guava ice cream or coconut turnovers. We had a wonderful evening out and dinner was really tasty.

We woke up to find out that tropical storm ‘Kirk’ was on its way and was going to be a direct hit on both St. Lucia and the neighbouring island of Martinique. Winds were going to be in the region of 50-60mph so the guys spent the morning hurricanising the boats and tying plenty of lines to many of the mooring balls in the bay. After the boat was prepped, Lena and I spent the afternoon around the pool whilst Gavin and the other guys went scuba diving just outside the bay.

The following morning I woke up bright and early to make a birthday cake for one of our friends on the other boat. At lunchtime we headed down to Chateau Mygo restaurant on the water’s edge for a birthday celebration. We drank cocktails, ate lunch and a gooey chocolate cake. As the weather started to take a turn for the worse, we headed back to our boats to bunker down. The storm started around 8pm with strong winds, torrential rain and thunder and lightning.

Thankfully the storm wasn’t too bad and we had no damage to the boat. Gavin spent the morning untying all the lines as I cleaned the boat inside and out. We packed our bags and got the boat prepared for our journey home. We tried to clear out at customs in the marina but they were closed due to the storm. Gavin and Tim decided to head over to Rodney Bay in a taxi to clear out as we wanted to set off early in the morning. Once again they got charged out of hours fee even though they arrived at 5pm. They then found out immigration was closed so the trip ended up being a waste of time anyway as we needed to return in the morning to clear out.

We woke up at 6am and headed back up to Rodney Bay. The guys headed into town to clear out with immigration and once back on the boat we started our journey home, back to the BVI.

Published by A Vanderful Life at Sea

View all posts by A Vanderful Life at Sea

If you enjoy reading our blog and would like to donate to help us continue on our adventure, please click the Donate button below